“I am sure many people would like
to create social-purpose companies
if such entities were recognized
by the economic system.
It is a major failure of the current economic system
that it cannot accommodate this basic human urge”

Muhammad YUNUS – Economist, winner of
the 2006 Nobel Peace Prize
Creating a World Without Poverty
Social Business and the Future of Capitalism (2007)

The debate over youth entrepreneurship in Europe is not a new one. Recently, it has been put on the top of the EU’s political agenda again for the following reasons:

As a result, many scholars and EU policy makers consider the start up of new ventures as a powerful option to tackle both youth unemployment and decreasing competitiveness of the European industry (see European Commission, OECD 2013, European Commission 2013).

Unfortunately, the European debate over youth entrepreneurship is very ingrained in the idea that policy makers should mainly sustain the start-up of new companies in the digital sector.
For clear evidence of this way of approaching this issue, see “A manifesto for entrepreneurship and innovation to power growth in the EU” available at www.smartmanifesto.eu.

The Social Business Initiative at a glance

Fortunately, the European Commission (EC) has put a wide concept of innovation at the heart of the “Europe 2020” strategy. As stated in the Communication on the Flagship Initiative “Innovation Union”, “our capacity to create millions of new jobs to replace those lost in the crisis and, overall, our future standard of living depends on our ability to drive innovation in products, services, business and social processes and models.” (see European Commission 2011).

Consequently, Social Innovation is regarded as front and center in the exploration of “new solutions to societal challenges” along with technological progress.
Finally, the EC is increasingly aware of the importance of alternative forms of entrepreneurship, called social enterprises or social businesses, in order to meet objectives of sustainable growth as well as objectives of social inclusion.
The most important European initiative to support social entrepreneurs is the Social Business Initiative (SBI), that was launched in November 2011.

The focus of the SBI is on creating an enabling environment in which European social businesses can flourish and increase their capacity to contribute to inclusive growth and social innovation more effectively. 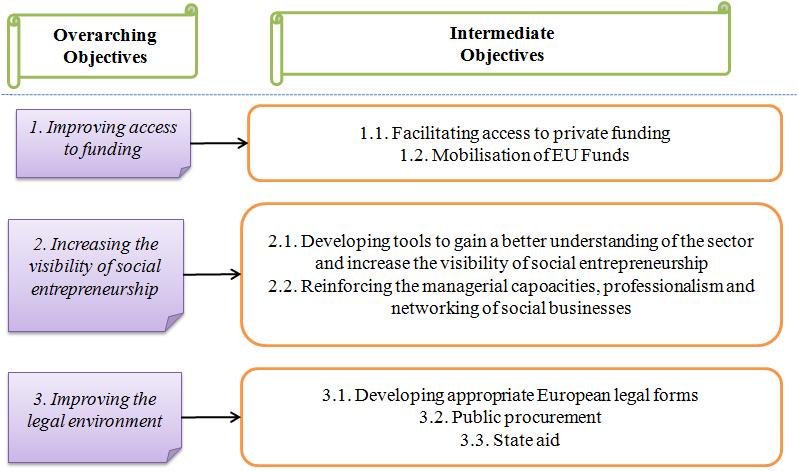 On the 16th and 17th of January 2014 there is the event “Social Entrepreneurs – Have your say”, organised by the DG Enterprise and Industry, in order to find those public interventions that best suit the purpose of creating a favourable eco-system for social enterprises. After the endorsement of the new financial instrument EaSI – specifically aimed at sustaining social innovation and social entrepreneurship – this event will certainly re-energize the debate over social entrepreneurship.